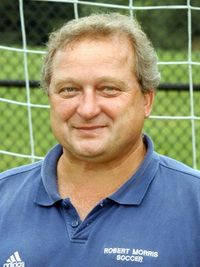 John Kowalski, from Queens, N.Y., came to the United States with his family from Poland in 1965 at the age of 14. He was named to the all-city team while attending Francis Lewis High School in New York City, and played for the German Hungarians in the German-American League at New York’s Metropolitan Oval. He went on to the University of New Haven where he played four years under Coach Joe Machnik, a relationship that would continue long into his coaching career. Upon graduation, he became Machnik’s assistant at New Haven and helped the Chargers to five NCAA tournament appearances, including the 1976 and 1977 NCAA finals. From 1973-1978 he was a player-coach for the New Britain Falcons of the Connecticut State League, winning the state championship or state cup every year.

Early in his career Kowalski moved into professional soccer as a player/assistant coach with the Cincinnati Kids (1978-1979). He was player/assistant coach for the Pittsburgh Spirit from 1979-80. In 1980-81, at the age of 28, he was named head coach of the MISL’s Hartford Hellions. In 1981, Kowalski became head coach of the Pittsburgh Spirit (at the time owned by Edward DeBartolo, who also owned the Pittsburgh Penguins and San Francisco 49ers). Kowalski remained with the Spirit five years through the 1985 season, establishing a 106-82 win-loss record.

In addition to his indoor accomplishments, Kowalski has spent considerable time coaching outdoor soccer in various professional leagues. He was head coach of Major League Soccer’s Tampa Bay Mutiny for the 1997-98 season and guided the team to the MLS playoffs. That team included the great Carlos Valderrama, who was named to the league’s Best Eleven and also competed in the MLS all-star game. Kowalski also coached the USL Pittsburgh Riverhounds from 1999 to 2000 and took that squad to the USL playoffs. He continues to coach the women’s team at Robert Morris University, which he has led the past 17 years. He also coaches the Fort Pitt FC Regiment of the NPSL and the U-16 girls Stars Crew United team in Pittsburgh.

With all his coaching experience in both indoor and outdoor soccer, Kowalski’s leadership of U.S. National Teams in the 1989 and 1992 FIFA world indoor soccer events is unmatched. The finishes represent the highest of any U.S. Men’s National Teams.

His team placed third in the 1989 FIFA Five-a-Side event in the Netherlands, utilizing a mix of young, up-and-coming U.S. players along with a handful of veterans. Three years later, Kowalski led the USA to its highest-ever FIFA finish, a second place in the 1992 world championships, losing 4-1 to Brazil in the final.

After two top-three finishes in back-to-back indoor world championships, Kowalski was named an international FIFA futsal instructor, part of a select group of coaches at the time who were regarded as the highest-level coaches of the indoor game.

Kowalski’s 1989 team was the first-ever U.S. team to win a FIFA medal. And the 1992 team, which competed in Hong Kong, is the only U.S. Men’s team ever to compete in the final game of a world championship event. He is also the only U.S. coach to lead U.S. teams to CONCACAF championships in both indoor (1996) and outdoor soccer, assisting U.S. National Team Coach Bora Milutinovic when the USA won the 1991 Gold Cup.

In 1991, he was named interim coach of the U.S. National Team and took the team on a trip to Asia, prior to Bora Milutinovic taking over. Kowalski assisted Milutinovic on the Gold Cup-winning U.S. team in 1991. Prior to Milutinovic taking over as head coach, Kowalski oversaw the National Team during USA victories over Olimpia of Paraguay (1990 champions of South America and world club champions), Canada and a draw with Mexico.

In 1993-94, Kowalski was head coach of the U.S. U-20 MNT, which included many players who would later star for the USA or go into the professional game.

Kowalski has led the women’s soccer program at Robert Morris University in Pittsburgh for the last 17 years. Most recently, Kowalski was named Northeast Conference Coach of the Year in 2015, the same year he led the Colonials to the program’s first NEC tournament. The Colonials advanced to the NEC championship game with a 2-1 victory over Bryant in the league semifinals.

In 1977, Kowalski and Joe Machnik founded the No. 1 Goalkeeper Camp, which exists to this day as No. 1 Soccer Camps. In 1979, Kowalski formed Star Striker School, based in Pennsylvania.