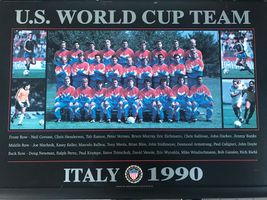 The 1990 US Men’s National team which qualified for the Italia ’90 World Cup, was the first such qualification over the previous 40 years. The players will be recognized for their achievement not only on the field but for their continued involvement in the growth and development of the game in the United States. Each of the twenty-two members will receive a WCF Distinguished Playing Career Award Their names read like a Who’s Who of American Soccer: Desmond Armstrong, Marcello Balboa, Jimmy Banks (deceased), Brian Bliss, Paul Caligiuri, Neil Covone, John Doyle, Eric Eichmann, John Harkes, Chris Henderson, Kasey Keller, Paul Krumpe, Tony Meola, Bruce Murray, Tab Ramos, John Stollmeyer, Chris Sullivan, Steve Trittschuh, Dave Vanole (decased), Peter Vermes, Mike Windischmann, Eric Wynalda.

“It’s a thrill that finally 30 plus years later the recognition of the 1990 World Cup Team that played in Italy is getting a chance to be recognized at our National Soccer Coaches Convention,” said University of Redlands head men’s soccer coach Ralph Perez. “More importantly this group has been the pioneers for soccer in America, the first time in 40 years the US made the World Cup. For me I call that the “Miracle on Grass” and we are really excited that we all will be together to celebrate in Kansas City in January.”

“It is a great honor for U.S. Soccer’s 1990 World Cup team to be recognized by the Walt Chyzowych Memorial Fund, said Sporting Kansas City manager Peter Vermes. "Our major achievement of reaching the World Cup for the first time in 40 years was a defining moment in American soccer history and changed the trajectory of the sport in our country. Every player on the team was incredibly committed to the objective of qualifying and put aside all individual agendas to attain that goal. We are especially grateful for the opportunity to come together 31 years later and celebrate this special accomplishment. On behalf of all the players and staff on the 1990 World Cup team, we thank the Walt Chyzowych Memorial Fund for recognizing our contribution to the sport and making this reunion possible.”